In parallel to the Opendata.ch Conference on Tuesday at Casino de Montbenon in Lausanne, we ran a participant-driven (BarCamp-style) unconference track. Ideas for brief talks and meetup topics were suggested online and posted the morning of the conference on a board. Photography by Nicolas Fojtu, licensed CC BY 4.0.

See also Martina's roundup of conference keynotes, and links to all slideshows (opendata.ch) including afternoon workshops. 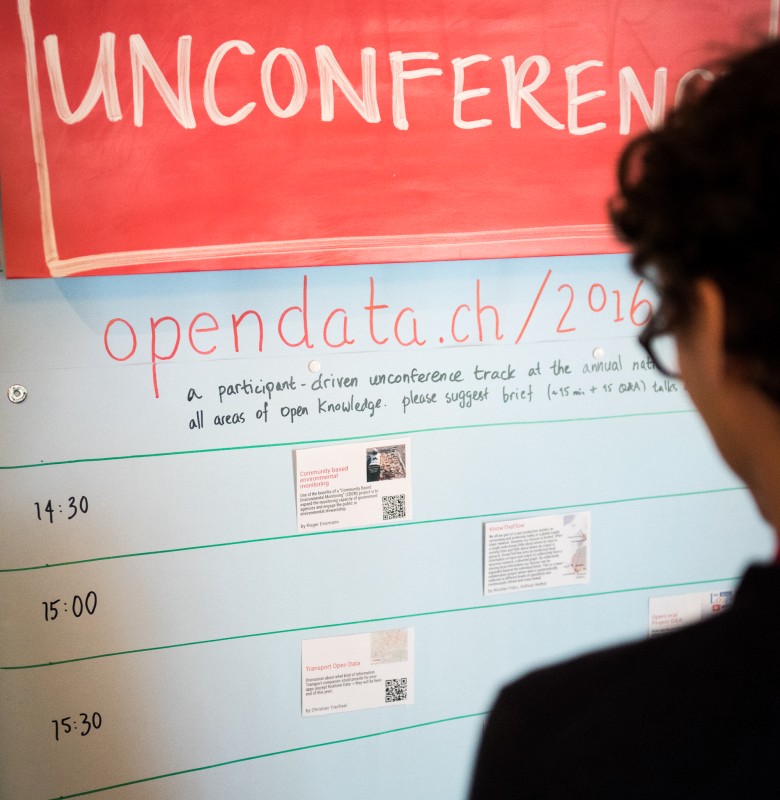 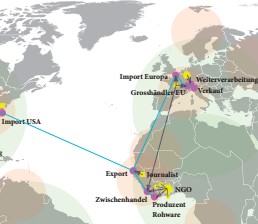 "a mass collaboration project where data is systematically collected at different levels of specificity and continuously refined and cross-linked."

In other words, people are able to input data into a database of distributed information. Responses from simple, mobile or paper forms specifically tailored for specific locales and user profiles are aggregated and combined with global open data sources.

An audacious goal and a project that may well fit within the framework of Open Knowledge Labs, whose members are behind similar crowdsourced platforms like OpenSpending, Product Open Data, and most recently, OpenTrials.

We talked about how platforms like Ushahidi enable new forms of data-driven journalism, what kind of emerging data technologies (from graph databases to natural language parsing, translation and machine learning) support these kind of efforts, and practical ways to get started. 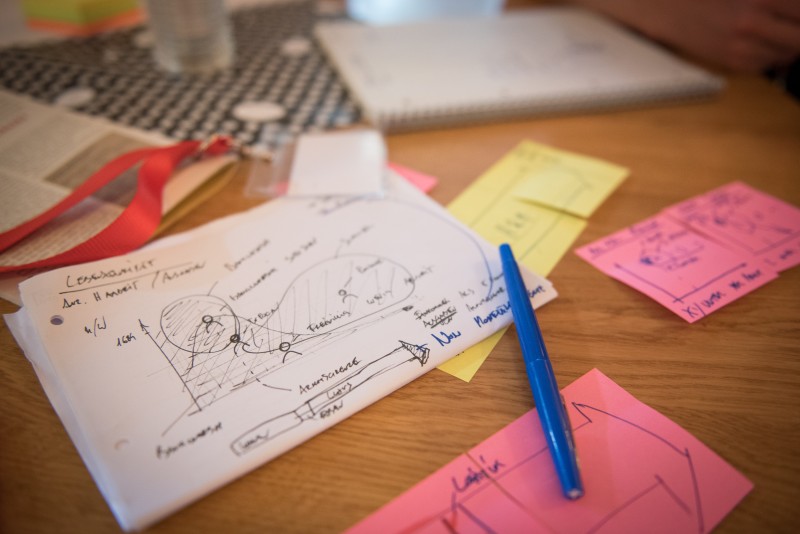 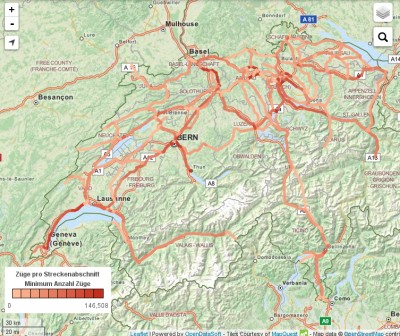 In the morning of the conference we heard an impressive presentation from the people behind open public transport data in France (see data.sncf.com), and it was great to have Christian Trachsel, a representative of the open data team at the SBB (Swiss national public transport company) on site to show people around their new open data site data.sbb.ch, answer questions.

The group had a discussion about "what kind of Information Transport companies could provide for apps (except Realtime Data - they will be here at the end of this year)". Check out their tutorials and explore the data at http://data.sbb.ch/

Having gotten used to the elegant simplicity of the transport.opendata.ch JSON API, open data developers may need some convincing to get on board. Taking part in @opendatach events is a good way to build bridges. More background (in German) at bahnonline.ch and Netzwoche. 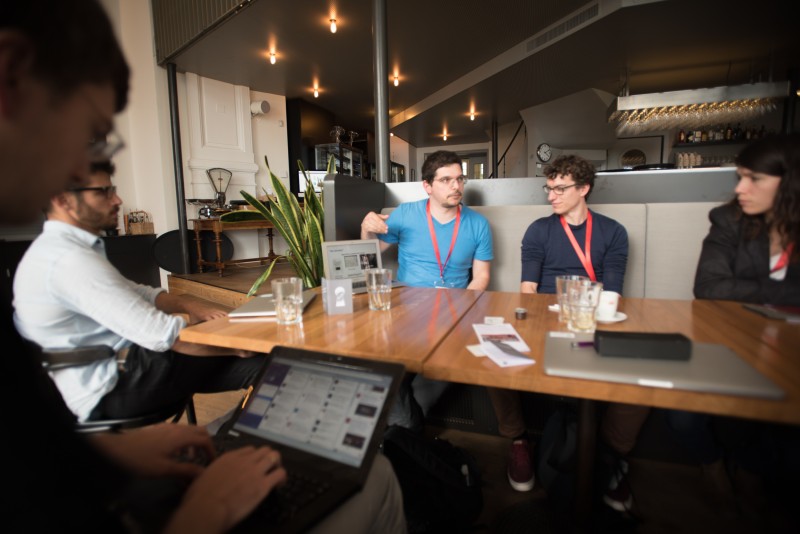 The law gives you access to tons of your personal data, including from US based corporate sources. Learn how to get to it.

He has had some remarkable experiences collecting his own personal data from various companies (advertisement networks, Apple, Google, Uber, and so on), and we discussed the roadblocks (laws and legal competence, geography, technical issues) along the way to owning your data - and potentially opening it up for wider use.

One thing is clear: in the age of big data, there's quite a long road ahead to better and fairer treatment of individuals, and bringing data literacy to the public is an important challenge along the way.

Can we make sure privacy policies don't get locked up in FOIA hell? Muchos muchos $$$ pic.twitter.com/BrIiZ7T21l

We had a chat at the end of the day about the idea and future behind the School of Data in Switzerland and I shared the basic ideas outlined in our concept document and slides.

In a short few months we ran Data Expeditions, started another Coder Dojo, and even hosted two electronic art shows. Thanks to sponsorship from Opendata.ch and the global network, we represented Switzerland in Brazil at an international meeting of the School of Data.

In July we are running a longer workshop on Data Visualization in Italian-speaking Switzerland together with our partners at SUPSI, which you can find more about here.

Thanks everyone for coming to the unconference and having a really mind- and data-opening time together. Looking forward to next time already? Follow the Lausanne Open Data Meetup if you're in the area - and feel free to send us a shout in any case. 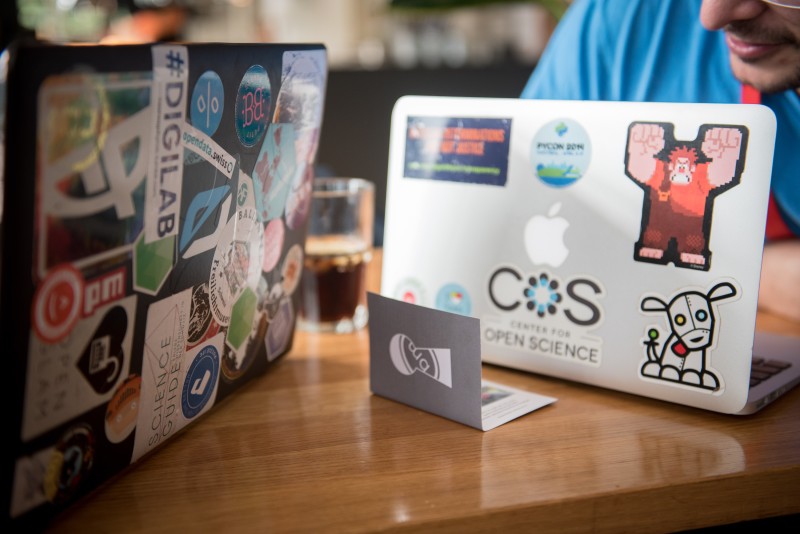 Photo by Axel Pettersson (Own work) CC BY 4.0, via Wikimedia Commons The 2nd Swiss Open Cultural Data Hackathon at the beginning of July was two days of fun,

In parallel to the Opendata.ch Conference on Tuesday at Casino de Montbenon in Lausanne, we ran a participant-driven (BarCamp-style) unconference track. Ideas for brief talks and meetup topics were