As folks who read this blog may know, I'm a fan of the Python programming language and Django framework. In fact, I try to code some Python every day as part of my freelancing work at Datalets.ch - and to engage with the local developer community as much as I can. Until now this meant going to the Swiss Python Summit and streaming events like PyCon and EuroPython - the big annual continental event, happening next week (July 9-16).

For the past few months, a group of Python and Django coders ("Pythonistas") have been meeting in my town in Bern, and last week a couple dozen of us, and those curious about coding in the language, got together at the new underground lab I've been involved with in Bern for a meetup about code and data. This is one of the first user groups using our newly launched space, and we are very excited to host them all! Several Powercoders also joined in who were having a monthly get-together.

★ Humble words of appreciation to 89grad and Liip for sponsoring the event.

★ Thanks to Andreas Keller, who is organizing the upcoming React Native event (July 13), for his help with the meetup.

★ Kind thanks to Stefan H. for the header photo, via Twitter.

A short recap of the talk follows.

Expanding on my thoughts from the Data Infrastructure workshop at the annual Opendata.ch conference which took place earlier in the week, I gave a tour of topics central to the open data movement with a focus on work in Python - talking about how we are working on improving data access and quality through various open source projects.

I described how portals provide simple and secure access to open data sources, of them most prominent the Python based CKAN which powers DataHub.io, opendata.swiss, Stadt Zürich, open.canada.ca, and many more. I spoke about the way Python is used both for specialized tools as well as general web publishing, like through the Pelican static generator, which powers several projects I work on including handbook.opendata.swiss and index.okfn.org.

We had a rather extensive discussion then about data formats, a supportive audience helped both to explain topics like the Frictionless Data, Linked Data, Graph databases, and covered a few data management principles. I gave a sneak preview of the Django-based Wagtail CMS which we are using at Datalets.ch, among other things to build API-powered, single-page or "headless" websites.

blemmy - An experimental headless backend in Python for your dataful sites

I didn't really have time to talk about the Flask-based Dribdat project I've been developing for open data hackathons. Or Datacentral - the alternative open data portal, or the Good Tables service, both Python based. Or describe the way Python is used at Jugend Hackt events which I'm a fan of, and the role of Python in data rescue initiatives like DataRefuge - all good topics to cover another time :-)

Good Tables, a Python project for next time...

While my talk was (perhaps rather extravagantly) mostly high level, I did show a couple of projects/approaches useful to the developer community. One of these was Libraries.io, a new service to discover open source libraries, modules and frameworks "hidden" in your code through dependency management tools. They are making some great open data available about the development ecosystem. 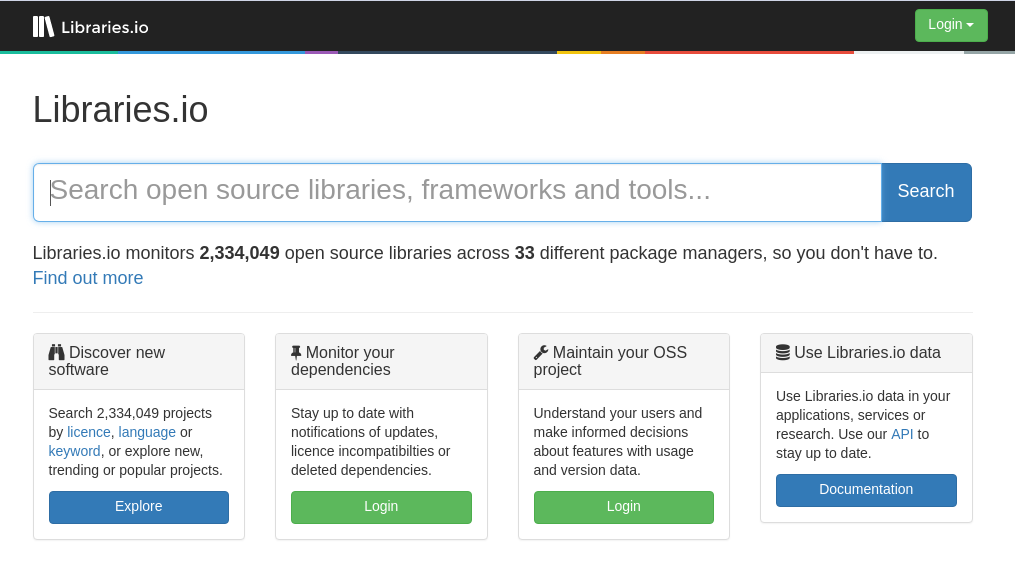 A similar more Python-centric notification service I use for some projects is PyUp.io. This leads me to think that perhaps a good title for a next time could be "open data at the service of the Python community" ;-)

For provocative further thoughts and an introduction to open data (about time we saw some python posts, people!), check out what Liip's Isaline Mülhauser has to say on the subject, and join our #python channel for more links and news.

See you at the next meetup! Please leave a comment if you would like to run your own presentation for the Python Meetup Group, or if you're interested in using the new E-0010 space, or if there's anything else at all you'd like to share.

The second Swiss DEM0N1GHTS of 2017 (see full invitation in English and auf Deutsch for background) went down at E-0010 in Bern, featuring an evening organised by Echtzeit - Digitale

As folks who read this blog may know, I'm a fan of the Python programming language and Django framework. In fact, I try to code some Python every day as