Last week I went to Berlin with Thorben, where we visited CityLAB Berlin,  a living laboratory of open data that has been inspiring us for a long  time. We spent the afternoon getting tours and discussing cooperation  ideas. Many thanks to Malgorzata & Benjamin. We then took part in a  hackathon organized by the Deutsche Bahn, and learned a few things about  the transport open data community up north.

An omnipresent topic was mobility in the form of bike sharing and micromobility. The consensus of bikes as alternative modes of transport,  as more sustainable, but yet flexible came to bear in multiple  projects. For instance some groups developed prediction ML-models and  visualizations around Call A Bike datasets.

Thorben worked on improving data quality on bike infrastructure in OpenStreetMap, e.g. to improve the basis for analysis. The idea being, that buiding a single-purpose editor for bike stands greatly improves accessability to mapping and has to potential to bring domain specific knowledge into OpenStreetMap even from the less tech savy. A quick proof  of concept based on the web editor for OpenStreetMap (iD) can be found  over at tordans/iD and a write up on GitHub at n0rdlicht/fahrradstellplaetze-berlin.

Meanwhile, I held conversations with various hackathon participants,  from machine learning enthusiasts to consultants, with whom we debated  the evolving industrialization of open data (e.g. open data and APIs working group at Bitkom) and role of the civil society.

The result of our exchanges is a new guide which talks about the skills, opportunities and structures which could  boost access to and diversity of the market for open data. It is written  from my perspective, sharpened by observations of high level  initiatives that are unable to really cater to the 'hackathon hacker', a  need to diversify the center where data craftsmanship happens. See http://jobs.opü.ch and loleg/earnopendata.

DB mindbox is an innovation office of DB which runs hackathons every half year,  attracting a varied group who by now is experienced and needed minimal  hand-holding. People basically all knew what they were doing, and were  prepared to try things even if there was a risk of it not working. Very  impressive.

Although the data.deutschebahn.com is technically and in part content-wise getting out of date, there is a  wealth of really interesting datasets in there. It's great to see that  DB is willing to take some risk and invest into - and share the results -  of forays into adjoining fields, such as telecom (Netzradar) and  building/geodata (Stuttgart 21).

We got a couple of superb hands-on workshops. IoT and machine  learning are big topics in Germany. I had some good conversations with  their management about this, I think they would be quite interested to  connect more with us as a relay for tech communities in Switzerland.  E.g. even though the demo failed during the presentation, I really liked  one project where they tried to remote control a station clock in  Hamburg. Integration with sharing services is a huge topic, and the ML  projects around the detailed bike sharing dataset were spectacular.

Of course startup seeking was a raison-d'être of the hackathon, so there was a lot of discussion of the sustainability of some of the  project ideas. I'm impressed by the commitments of mFund and DB StartupExpress.

At the same time the political situation is kind of puzzling. People were talking a lot about this kind of thing..

We look forward to learning more and strengthening exchanges across  borders. Many thanks to all for the experience, and to Thorben and the  rest of the cividi team for supporting our hackathon efforts. 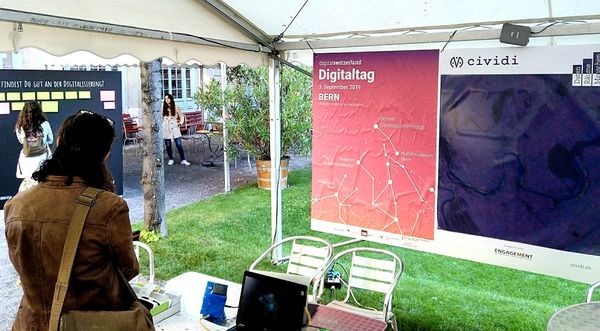 Presenting the topic of digital tools for analogue spaces, in one of the most public spaces of Bern for Swiss Digital Day. 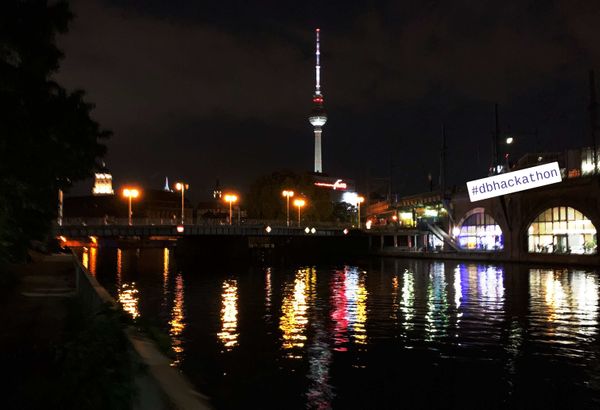 A trip to Berlin to visit CityLAB, and take part in a hackathon organized by the Deutsche Bahn.