Impressions from last week's PlayBern Festival for Games and Culture, an event at the Grosse Halle ("big hall") in central Berne, four days of playing, making, and performing in compliance with all social distancing and safety measures. Some glimpses from behind the scenes of the 2020 Game Jam and Demoshow.

Let's take a little step back. I have known the organizers of the Festival since 2012. We exchanged game tips and ideas over the years, and started running meet-ups together in 2017, with a small community of enthusiasts joining us at the Effinger Coworking Space and later Impact Hub Bern for what we initially called "Meet. Make. Game!"

A recurrent theme here was knowledge sharing about the art & science of making ludic (playful) experiences - as well as tips of must-play games or new releases we are working on. A couple of the members are professionals in the small local gamedev scene, and the rest of us in some way want to follow in their footsteps. In the event pictured above, we got game jamming tips from Alexis, who is today working on Terraformers.

The PlayBern association that formed out of this now runs the meetup group and for the second year running has organized a Festival with support from a range of familiar culture sponsors. Many thanks to all of them - to Pro Helvetia's SwissGames project in particular for our close collaboration on promoting and setting up the Game Jam. The association runs workshops in schools, working to teach younger and older kids about gameful creativity.

We promoted the Game Jam along with the Festival, running focused invitations in the local tech scene and some Twitter and Facebook campaigns. On our Vimeo channel we released a two minute teaser animation with some game jamming tips:

It was very fortunate that it was still possible to run the event, a decision which was scrutinized every day while the cases counts were rising. In the end, just 3 of us worked closely in person around the table, with 8 others joining online. We started on Friday morning with a brainstorm. Here are some of the ideas that we came up with:

One or two of these were inspired by a video mood board (Vimeo) which contains a bunch of clips around the topic of our game jam: Games Without Borders. Next, we looked at the equipment we had available, the software tools we were willing and able to use, and got advice from a couple of experts on video conference.

Many thanks to Robin Baumgartner (@Robin_B) - whose LineWobbler was part of the PlayBern 2020 exhibition, and to Fabien Benetou (@utopiah) - who we met at GLAMhack and get amazing ideas from about open source XR/VR. Some of the video dropped from our recording due to the poor connection, but you can get the gist of our conversation here:

My advice is to try to do a very small thing in the beginning, and build it up from there. The simpler the better, and then try to add things slowly as you get the first thing working!

Creative coding aficionado Andry Joos joined us in the chat, suggesting we respond to the theme with something like:

With a bucket of ideas in hand, we set up our game jam corner and got cracking! We had an assortment of computers, from a Raspberry Pi 4 to a 2010 Macbook and modern gaming PC. We borrowed tablets, phones, LED displays, a Muse headset, even a Furby, to inspire each other to go beyond the usual definitions of "video game".

With the Covid-19 social distancing measures we only had room for a handful of participants on site, so we encouraged everyone to join us for the Game Jam online through the Discord server. Everything posted here was also shared in the chat. In the hours that ensued, there was plenty of masked code wizardry..

By lunch the next day we were .... not done! We pushed the deadline forward .. just a little to make sure everyone could upload their submissions. Getting the right release up and running with autologins and batch scripts was the most (actually the only really) nervewracking part of the Jam ...

By 1pm the guests started to arrive. One by one, people were allowed to try the games, in gloves and with plenty of Dettol on the game controllers in between. Here are the results!

Gawibo is a (fullscreen, downloadable) game without borders. Fun and simple to play despite physical or psychological backgrounds. Playable with any key (i.e. it is a one button game, it doesn't matter what key you press). Featuring a beautifully rendered monochrome 3D environment rendered in Unreal Engine, you are a glowing orb jumping up, up, up, to find your friends. If you fail, you are alone, floating in darkness. Interpreting this heartwrenching story is up to the player's imagination. Reminding me of Krillbite's The Plan, this entry is art house gaming at it's best. The developers wrote:

We wanted to make a game that uses just one button so anyone can play it. We also thought about color blindness, deafness and such things and ended up with Gawibo. A hopefully satisfying, not frustraiting and easy to play experience that's also good looking. ;-) We are curently working on a bigger project called Transmoji. A 3rd person puzzle adventure in which you control a character that can morph into different shapes with different abilities.

We shall eagerly stay tuned! In the meantime, download Gawibo for your Windows computer with a 3D accelerator. Or just look and be jealous of all the fun they were having:

Palle (that's italian for Ball) is a multiplayer online proto-game made in Babylon.js. Once the second player is online, balls will fall and you will try to squash them as quickly as possible, in whatever color you choose. The developer admittedly spent most of the time working on the sophisticated Web Sockets based network synchronisation code - as for the gameplay, let's just say the source code is out there and pull requests open! We still managed to have a few frantic contests (mouse vs trackpad was a favorite) in the afterhours, while the game's Amiga textures and wicked style has definite demoscene potential :-) You can try it now: grab a cold beverage, open the link, and share it with a nearby (or on video call) friend. Schiaccia tutte le palle!

You are "Jester, a survivor trying to survive in a world filled with infected zombies everywhere. You have a iron sword and a iron armour. You have managed to survive several months avoiding zombies and scavenging food.

This prototype is something I worked on with Sxvxgx (a gamer handle, pronounced savage). Our project uses only your webcam as an input device. Try it: hold up your fist to attack. Hold up the palm of your hand to defend when the zombie is looking. The game engine is Pixi.js, we used CodePen to get started and Piskel to reuse assets from OpenGameArt. Palm detection was deep learned with Google's Teachable Machines (shown at the top of this post), and uses TensorFlow.js. It is a fun hack with plenty of promise :-)

We are not quite sure where Robot Runner came from, a fun little platformer that we played and gave feedback on. It was nice to get to interact with someone working on their first game halfway around the world during the Game Jam.

All these games were shown on Saturday and Sunday, and it was a terrific experience to get to run the Game Jam and support the public viewing. If you are interested in running your own event or just want to work on a game and have some questions, drop us a line in the Discord channel.

In the coding breaks and after the submissions were up, we had a chance to experience the rest of the Festival, play all the terrific kids contest entries, chat with our big hall neighbours from eSportsbar Erupt (who are $ currently crowdfunding!), watch stage performances and costume shows, just to enjoy while we still can the wonderful ambiance of a giant room filled with geeky creativity.

Special thanks go to Bettina, Levyn, Giuseppe, Pascal, Tristan, Mike, the entire PlayBern and Reitschule team, as well as to all our friends at Echtzeit for making this happen!

A look back at a year of (mostly online) hackathons, with some thoughts upon their setting and impact. 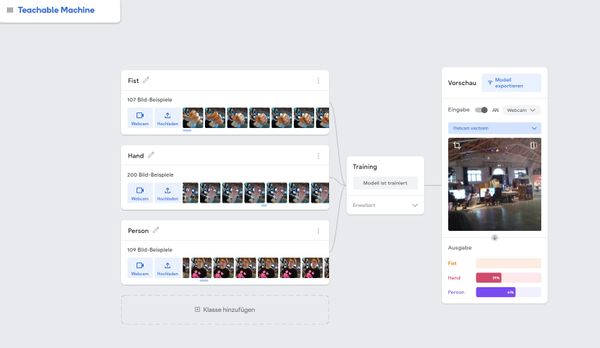 Glimpses from behind the scenes of the 2020 Game Jam at the PlayBern Festival for Games and Culture.