Last week I was in Berlin to take part in the Open Knowledge festival and the csv,conf side event. First, a quick intro to the organisation behind this conference if you’re not familiar with us already: Open Knowledge, also known as OKFN, was started ten years ago by a group of well connected UK activists, most visible among them the economist co-founder Rufus Pollock. The wider goals of promoting the “idea of open knowledge” – running events, projects and infrastructure – are grounded in the conviction that (as I interpret it) while industry embraces data, especially government data, and the public sector evolves to a new digitised form of transparency and efficiency, a strong movement at the grassroots is needed.

This movement of active participants in the access to knowledge debate strives to accelerate momentum, provide critical input and collaborate in shaping a data-driven society with the values of a diverse, apolitical, independent body of people distributed around the world. Our Swiss association Opendata.ch is one of the many local chapters, and we organised last year’s OKCon. The festival takes place every other year and brings together hundreds of people from across the network.

Organized by Pollock, programmer extraordinaire Max Ogden, and other members of the OKFN Labs collective, we kicked off the first day with csv,conf – a side conference focused on sharing and using data by simplest and most elegant means. There were over 30 presentations running in parallel, full coverage on Lanyrd will be updated with more slides and videos.

Presentations at csv,conf on making truly great flat-file apps, and the new open-source graph database Cayley rounded off the afternoon. I was inspired by a small group in Portugal who launched a no-nonsense alternative to the official open government data portal. By ‘dada artist’ Thomas Levine who bends conceptual barriers to hacking data like noodles in a bowl. By technologists working at all levels of society reaching for a bright light at the end of a tunnel of proprietary standards and information lock-in. It was great to hang out with this highly informed and energetic bunch of people. 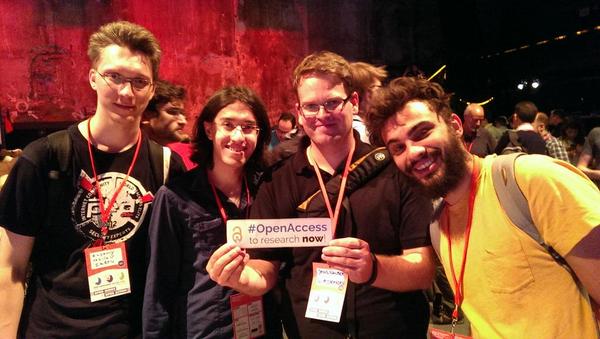 Since we invited the Open Knowledge community to Geneva last year for OKCon, a number of threads carried me straight into the crossroads of debate at this year’s conference. A project I helped to design called the Open Access Button was presenting as part of the Knowledge Fair that opened the main event. I had a chance to speak with many attendees about the present and future of community-based activism, where simple tools help to create valuable data to give researchers a market-like perspective on the landscape of science interest. Later on, we had several sessions with the growing project team.

Original initiatives like this are being used to boost public awareness and interest in academic research, work out solutions to the legacy of science publishing, all the while helping people to get access to the results they need. We ran demos, experienced tons of interest and new ideas emerging. Next steps for the project are taking shape: continuing to build usable tools (which should go faster with some new funding) for a stronger user community. We must open up, visualise and act upon the data collected in the past year, and better manage activities across commercial/voluntary and academic/public lines to make sure this excellent initiative succeeds.

The goal of the Festival was all about “access to key information and the ability to use it to understand and shape lives”. It is hard to relay all the things learned and experienced in such a tight space. Not only did #okfest14 attendees talk about digitising all aspects of our lives – from quantified self to government, personal finances to aid spending – they did so in a way that sparked interest and excitement in the big societal shifts this is causing. The conference was a safe platform to debate (and get hands dirty with) data mining, political work and information security, all in one place with quite possibly some of the most open minded, honest and intelligent people anywhere.

There was great support for the main conference, from Google’s provocative keynote (slides) and widely debated sponsorship, to eye-opening presentations from Global Witness using data visualisation to fight corruption, and Argentinian activists vibrantly arguing to do away with the “1886 Berne Convention [that] still regulates how we distribute knowledge…[and] regulates how we access culture in the 21st century.” Vice President Neelie Kroes’ account of digital reform and political transparency at the European Commission helped put things into perspective. 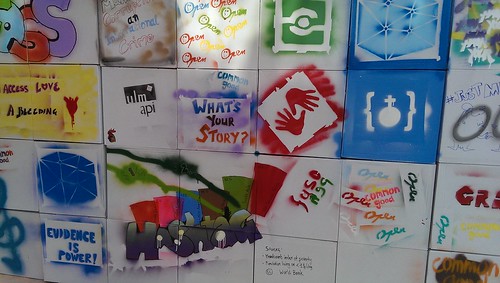 It was awesome to hear about progress in making the world more Open from so many countries during the multitude of workshops and track sessions. I enjoyed the group session on building Open Data Communities, during which I hacked together a quick take on a mentoring/partnering platform idea I hope to post more about soon. The Opening Politics session was eye opening to the range of possibilities in working with political open data, and extremely engaging due to the sheer passion of contributors and presenters. Just Do One Stupid Thing, and other secrets of making political art with data was chaotic, roundabout and fun, yet managed to drill a highly important point home: art and data are tools of expression that absolutely anyone can use, no excuse.

Of course, I couldn’t miss on having a little fun on my first time in Berlin, so the nights were short: I attended a Creative Commons party at one of the first hackerspaces, danced to guest bands from Kenya and Cameroon, and even spray painted some open data graffiti. Check out the photo evidence, if you’re so inclined!

Computers on parade in Berlin, 1987

We should keep going and growing and supporting this extraordinary community. If you’re not already part of the network, it’s easy to plug in – find a local group in your area, start one if there isn’t one near, look for working groups in your topic of interest, let the knowledge and ideas flow. We are working on making it even easier through regular meetups and hangouts, and in the near future, mentoring sessions.

The open Internet, open source and hardware, openly debated web standards are today at the root of the most viral and fast-paced transformations of living standards. Using open data is only half as good as being an enabler, publisher and promoter of a data-driven economy. Everyone is caught up between transparency and secrecy, the world is shrinking fast, and openness may well become our most powerful weapon against the sharp ends of corruption, patent litigation and trademark wars.

It’s important not only to be aware of the latest trends, tools and platforms, but to be part of the debate – about new standards and ecosystems, new ways of living and acting as citizens of the world that will not only paint the roadmap, but provide vital support to keep us going through the changing landscape.

Thanks very much to Open Knowledge Central, to all the volunteers and presenters and supporters, for organizing an incredible week. Special thanks also go to my team at Centralway for sponsoring my first trip to Berlin.

I made this presentation for a PyZürich meetup. It serves as a brief introduction to loading and processing data with Pandas, the open source Data Analysis Library for Python. You can get a copy of the iPython notebook and the open data used here:

This weekend we held the first International Sports (Open Data) Hackdays together with the Opendata.ch association and friends in the Open Knowledge network. Two days of intense data wrangling, spectacular visualizing and app-building on an unusual topic (for a geek crowd), one that